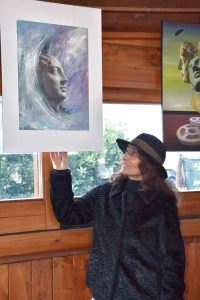 “We’ve always looked for them, inside the rain and the wind, when our strength was abandoning us, or while we were dancing with our eyes closed. We’ve looked for them inside happiness or tears, always beautiful, always far away like the sound of snow, like the smell of summer rain”. The event organized by the Associazione Volontari di Capitano Ultimo Onlus on Sunday, December 3rd, 2017, was dedicated to them, the Angels.
Angels that not only exist high in the skies but also live among us, portrayed with Barbara Peonia’s refined symbolism. Represented with the donating spirit, which is shared by the project Bits of Future: Food for All and the Associazione Volontari di Capitano Ultimo Onlus.

Barbara Peonia’s paintings were exhibited during the event. An artist that “stands out not only for her painting technique, but especially for the genius language and the ability to throw the observer into her universe, where spiritual and material levels and frequencies merge. With her soul searching, which she uses to go through her very self using her art to tell about the “Beyond”, Barbara Peonia is perfectly in line with the aim and mission of the movement Arte Quantica (Quantum Art)” said Giandomenico Cammarata, who talked about the artistic Movement’s peculiarities.

Commander Ultimo started the event by thanking the attendees and especially the artist, who donated her 12 “angels” to the Association.
“We were looking for the Angels. That’s how this event was conceived […] we looked for them and eventually we met Barbara Peonia. […], with the beggar’s desperation we asked her to interpret them […], she did it asking nothing in return and gave them to us […], we brought them to a poor place, where the people who come here create survival conditions for others […] it’s a big miracle performed by the Angels. […] on this path we talked about the Angels putting them together with HYST flour, which is produced from what is usually thrown away, making a new life-supporting product […] Scienza per Amore is the Association that has been fighting for this throughout the years, through many difficulties. We must give it to them and honor them for they deserve it.”

The Association Scienza per Amore participated in the festivity by bringing food produced with the HYST flour: it comes from a gift which supports with food and energy, it is the Hypercritical Separation Technology. In fact during the event, the guests had the opportunity to taste HYST pasta, bread, pizza and sweets.

Engineer Pier Paolo Dell’Omo, president of Scienza per Amore, talked about how the project Bits of Future, conceived by Danilo Speranza and promoted by the association, in synergy with the African Union, has started from Senegal.